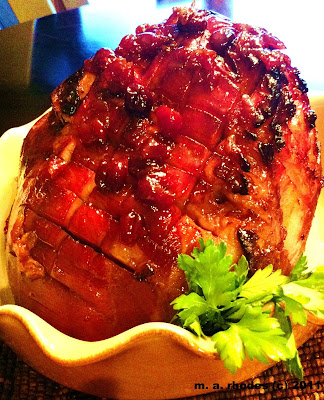 Sunday dinner and your holiday table will never be the same with this amazing Baked Ham glistening in a sweet Maple Cherry Glaze.  The Glaze perfectly balances the smokey saltiness of the Apple Cider Baked Ham.  I also use a good quality bone-in Ham that is also skinless for the best flavor and ease of cooking.  For a unique flavor and to ensure moisture I bake the Ham first in Apple Cider and then glaze it with delicious a glaze of Maple Syrup and Cherry Preserves.  When you are Cooking The Amazing it doesn't have to be Easter Sunday or Christmas dinner to serve the most delicious Baked Ham.


Here is the recipe.


2.  Remove your Ham from the plastic and place it in a medium roasting pan.  Place the roasting pan on a cookie sheet for safe and ease of transfer to and from the oven later.  I use a disposable foil roasting pan that requires no clean up!  Place the Ham with the exposed meat side down and score the outer flesh with a knife in a criss cross pattern about 1/8th inch deep.  Don't cut too deep or the juices will escape leaving a dry Ham as it bakes. 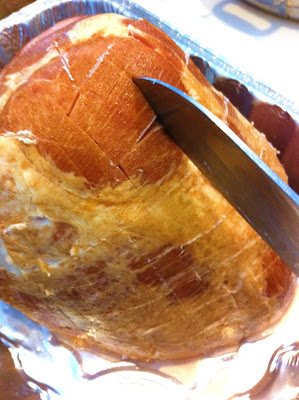 3.  Pour 2 cups of Apple Cider (or Apple Juice) over the Ham.  Cover your ham in aluminum foil tightly. 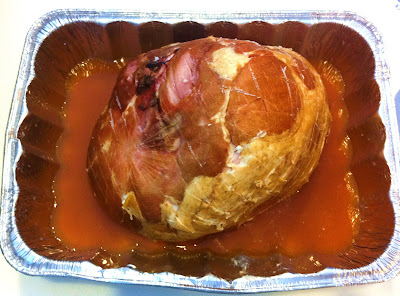 4.  Bake in the oven at 375 degrees.  After the first 1 hour 20 minutes of baking, remove the Ham and baste it with the pan juices from the bottom of the pan.  Return to the oven covering again in foil. Repeat the basting 4 more times (basting every 20 minutes for the next 1 hour and 20 minutes of baking). Keep the Ham covered with the foil as it bakes between bastings.  After the last basting, return the Ham covered in foil to the oven for 20 more minutes. 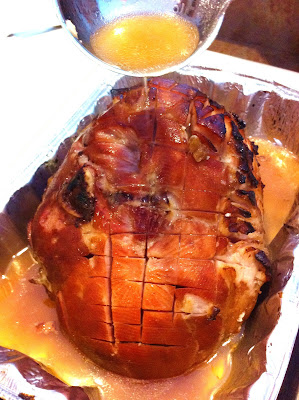 5.  During the last few minutes of baking, prepare the Glaze.  In a medium sauce pan, over medium heat, combine the Maple Syrup, two 12 oz. jars Cherry Preserves (I use Smucker's brand because it has whole Cherries in it), Dark Brown Sugar, Dijon Mustard, Cinnamon and Black Pepper.  Mix well and simmer for 5 minutes. 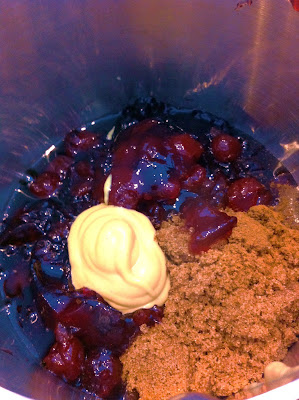 6.  The Sauce will become thick and glossy as it simmers.  Taste it and adjust to your liking. 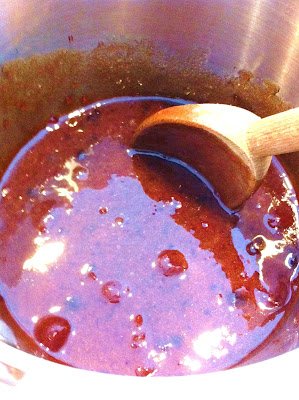 7.  After the Ham has baked for a total of 3 hours covered, remove the ham from the oven and remove the foil.  Spoon off all the pan juices from the bottom of the roasting pan and discard.


8.  Then pour the Maple Cherry Glaze you made over the Ham.  Keep uncovered and return to the oven and bake for 30 minutes more, undisturbed, without basting at 375 degrees.  Watch the Ham close for burning of the Glaze.  It will get dark in some areas as the Glaze caramelizes.  This will be the best bits! Then remove from the oven and check the internal temperature which should register at least 140 degrees in the deepest part of the Ham (do not touch the bone) when done.  If it is not at 140 degrees yet, allow it to rest for the 20 minutes in step 9 and then recheck the temperature.  The temperature will continue to rise as it rests.  If it is still below 140 degrees, return to the oven for 15 minutes at 375 degrees.  Repeat as necessary until you've reached the right temperature.  Ham sizes and ovens will vary which may increase cooking time. 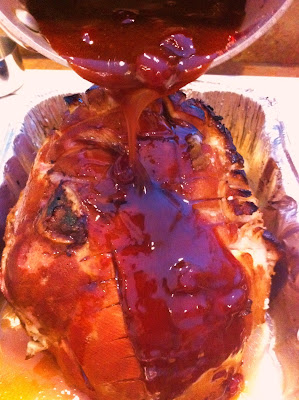 9. Once you are at 140 degrees, spoon any of the Glaze from the bottom of the pan over the Ham several times to coat it well.  Pour any extra into a serving bowl to serve with the Ham on the side.  Tent the Ham in foil and let it rest for 20 minutes on the counter to allow the juices to redistribute before slicing and serving. 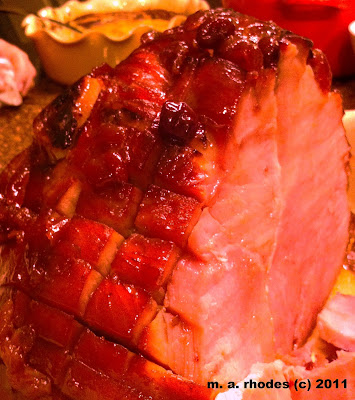 COPYRIGHT (c) 2011
Posted by m. a. rhodes on 4/07/2011
Email ThisBlogThis!Share to TwitterShare to FacebookShare to Pinterest

This ham was very moist and lots of flavor.

I've tried several of your recipes recently, the last being the Maple Cherry glazed Ham for Easter, and it was absolutely outstanding. Thank you for taking your time to share your expertise and recipes.

I have been using your recipe for the past two years for Christmas and Easter. I always get rave reviews about this ham. I have served it to large crowds and I have had people ask me for the recipe. It is AWESOME!