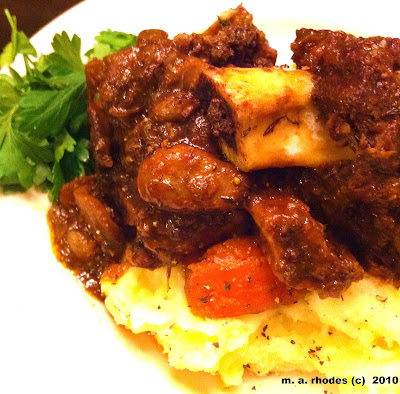 Braising is one of those words that scares home cooks away from many recipes.  You probably have braised a hundred times and did not even know you were braising.  Think Beef Stew or Chili.  Yes, you were braising.  Braising is simply using a dry cooking method followed by a moist cooking method, usually high heat searing of Meat or Veg then adding a liquid and cooking at a long low heat in the oven or covered on the stove top.  This is rustic French bistro style cooking.  Braised Beef Short Ribs are a hearty and very satisfying cold weather dish that takes little skill to achieve an amazingly tender and flavorful dinner.  Serve the Braised Short Ribs over fluffy Yukon Gold Mashed Potatoes or Polenta and with a rustic Bread to sop up the incredible rich Sauce.   The next day the flavors are even more intense and delicious when everyone is fighting over the leftovers because you were Cooking The Amazing.


Here is the recipe.

1.  Preheat your oven to 300 degrees.  Place a large heavy bottomed pot on the stove top (like a Le Creuset pot).


2.  Over medium heat cook 4 strips of Bacon in the large heavy bottomed pot until crisp.  Remove from the heat and allow to drain on paper towels.  Later you will crumble the Bacon into the finished Sauce.  Reserve the Bacon Fat in the pot. 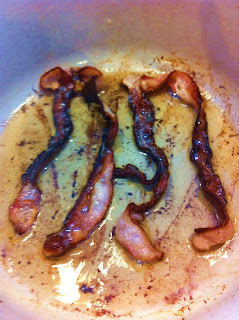 3.  Dry off any moisture on your Beef Short Ribs using paper towel.  The meat will brown better and caramelize instead of steam if it is dry.  This browning will produce a lot of flavor in the finished dish. 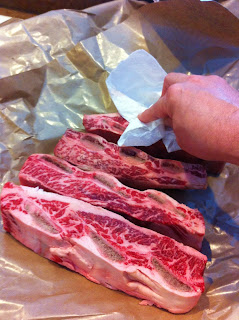 4.  Cut the Short Ribs into 3-4 inch sections.  Trim some of the excess outer fat, leaving some for flavor.  Season the Short Ribs with Sea Salt and Black Pepper. 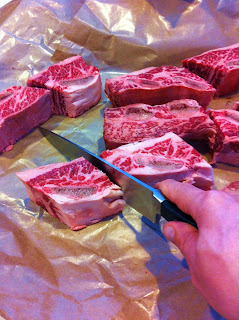 5.  Over medium high add 3 T of Olive Oil to the Bacon Fat and brown all sides of the Short Ribs until they get a good dark brown sear.  Give the Short Ribs room between each other so they do not steam and brown properly.  You will have to do this in 2 to 3 batches to brown all the Short Ribs well.   You will not be cooking through all the way, just browning at this stage.  The Short Ribs will be raw in the middle. 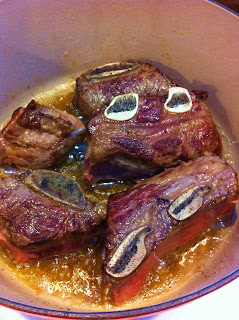 Place the first batch after browning in a bowl to catch any drippings. 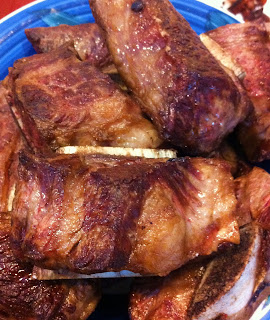 6.  After all the Short Ribs are browned well, remove them from the pot and set aside in the large bowl to collect any drippings as they sit.  Next remove the used Bacon Fat and Olive Oil from the pot leaving any of the cooked on bits stuck to the bottom of the pot.  Reduce the heat to medium and add 3 T of fresh Olive Oil and saute the sliced Mushrooms until browned and crisp. 7-10 minutes. 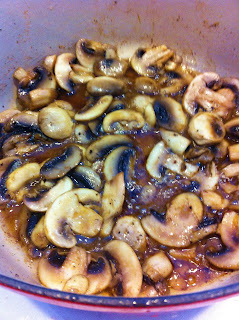 7.  Then over medium heat add the diced Onions and Carrot and saute until soft, 5-7 minutes.  Add the minced Garlic and cook for 1 minute more. 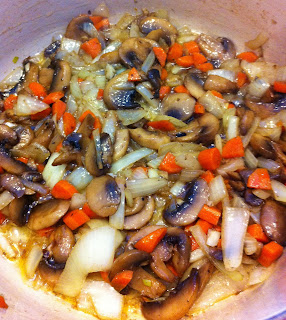 8.  Deglaze the pot by adding 2 cups of Cabernet Sauvignon.  As soon as you add the Wine increase the heat to high and stir rapidly, scraping the bottom of the pot releasing the cooked on brown bits stuck to the bottom.  Bring to the boil then add 2 cups of Beef Stock and the Tomato Paste, Beef Base, Thyme, Bay Leaves, Sea Salt and Black Pepper.  Allow to boil, stirring continuously for 3 minutes. 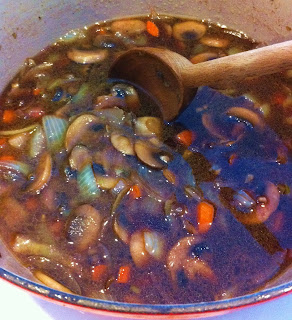 9.  Add the Beef Short Ribs and any juices that collected in the bowl to the boiling pot.  Put them in snugly against each other and boil for 2 minutes with lid off.  The liquid should cover all the Ribs by about an inch or so.  If a little bit of the Ribs are exposed do not worry, all will be fine. (See picture below.) If there is not enough liquid add more Beef Stock to cover and bring to the boil.  Before you place it in the oven, taste the liquid.  If it is dull or under seasoned add more Salt and Pepper as needed.  Do not over Salt.  This tasting part is most important.  You want to have a well seasoned cooking liquid in the beginning to end up with well seasoned Braised Short Ribs on your plate.
Then place the lid on the pot and place in the center of the oven and cook for 3 hours at 300 degrees undisturbed.  Don't peek and release the moist heat that will make these Short Ribs fall of the bone. 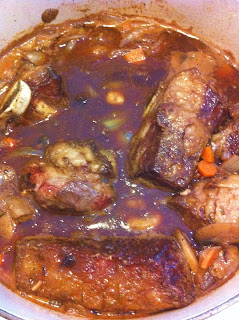 10.  After 3 hours remove from the oven and take off the lid.  Prepare for a steam facial!  Remove the Cooked Beef Short Ribs to a large bowl.  Be gentle, it will be falling off the bone.  Allow the Sauce to sit for 3 minutes so the fat rises to the top.  Skim off the fat using a large spoon and discard it.  Remove as much as you can.  Remove the Bay Leaves and stems from the Thyme if you used fresh Thyme. 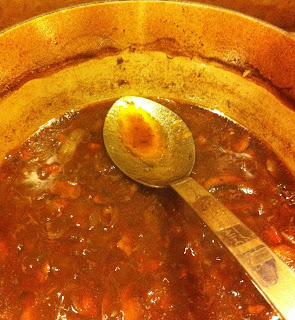 11.  Remember, the pot is HOT, it just came from the oven!!!  Use pot holders and place the pot of defatted Sauce over medium high heat and bring to a boil, stirring frequently, and reduce by a third.  This will concentrate the Sauce into a rich incredible Sauce. Taste the Sauce and add Sea Salt and or Black Pepper is needed at this point.  Crumble the Bacon and add to the Sauce stirring in well. 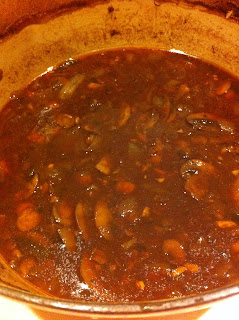 12.  Add the Beef Short Ribs back to the pot of reduced Sauce and remove from the heat.  Coat the Short Ribs in the Sauce well.  Serve Immediately over Yukon Gold Mashed Potatoes or Polenta. 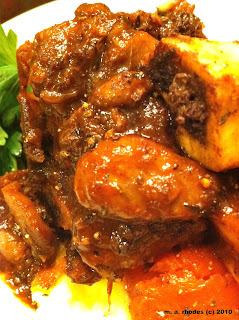 COPYRIGHT (c) 2010
Posted by m. a. rhodes on 12/05/2010
Email ThisBlogThis!Share to TwitterShare to FacebookShare to Pinterest

Wow! I recently found this blog and boy, I am happy I did! I tried several "Braised Beef Short Ribs" recipes but this is the BOMB! Maybe it was the wine that made the difference I don't know. I actually had bare bones because the meat had just fallen off. Rave reviews from family. Thanks a lot

It's a favorite on my house, too! I'm sure the wine helps!